Celebrating 35 Years with AMC Global: An Interview with Michelle Brenner

Spending 35 years at one company is an achievement we don’t see very often anymore, but Michelle Brenner (Mic) has been with AMC Global for more than three and a half decades. She started with the company in 1985 back when we were called Attitude Measurement Corporation, founded in 1979. She works as the Data Group Manager and has certainly seen our world of market research and data analytics change throughout the years.

Q: Let’s start at the beginning…

A: I started at the first building on Industrial Boulevard in Philadelphia in 1985 in a data entry position. I got very good and very fast at data entry in those early years. I met the company founders Ray and Ruth Roshkoff and I thought, wow this place is great. I had a chance to meet the Roshkoff’s three children and watch them grow up (like me), and actually work with them at the company.

Shortly after moving to the second building on Jamesway in Southampton, Pennsylvania, we received our own email addresses! This building was also where Ray Roshkoff had the tab department create the normative database, and it has been going on ever since. The database started around 1999 or 2000. In 2007, we moved again to our third building on Walton Road in Blue Bell, Pennsylvania (most people could not find this building!).

Around 2013, we settled at our current location on Arbor Way in Blue Bell and it has the best setup with fun, open areas and little nooks to have small meetings. Over the years, I’ve seen people come and go like at any company. Right now, I think our CEO Ken Roshkoff has the best group of people that I have ever seen together working at AMC Global. I feel honored to be able to work for the company for this many years and I hope to keep on going, and going, and going. I’m just sorry I missed the first six years or so since it was founded in 1979.

Q: How data processing has changed since you started with AMC in 1985?

A: We used to have to do manual data entry and coding! After two years of data entry, I was taught the tabulation software called UNCLE and I was really intrigued. We used a mainframe UNIX system called Apollo Domain with 8” floppy drives. The data entry computers had no internal drives, you had to just boot up a disk, and then use the data entry program disk. Even after switching to PCs for the tabulation, we still used UNCLE. It was cool back then watching the transition to Microsoft® Windows and using Excel and Word. We also printed on a line printer that was form feed and used a collator for the tables to be put into a binder. Tabulation was also responsible for creating graphs for presentations. And hand-delivering faxes to people! And we (me) printed honoraria checks on that same line printer until the company switched to a laser printer, which seemed so much different.

Eventually, we started using a new tabulation software package called Quantum in 1999. It was working well, and we thought it was pretty easy to use. Then in 2002 or so, our data processing manager showed us even easier ways to use the Quantum program. I finally realized how the software program was working and I really liked it. I started creating batch files so we could shorten the steps we had to take to create tables. And created templates for many other steps. I still remember my first tab job on Quantum—it was the NESTLE Wonderball ResponseCheck Purchaser Follow-Up Study.

The database has gotten huge with so many ResponseCash PFU (Purchaser Follow-Up) studies, spanning more than two decades. It has evolved too, many fields added. I remember when we first started it, there was just a page or so of stuff picked up from the questionnaires, as it has evolved there is so much more to look at in it. It has been fun to watch AMC Global evolve on the technology front across the years, along with the growth of the company in terms of the types of projects we do.

I also want to mention how much the reports delivered have changed. They used to be included in the binders with the tables and graphs and were ok looking.  The reports now look so extravagant, full of much more detailed information.

Q: How have you changed since you started with the company?

Q: What has made you stay for more than 35 years at AMC Global?

A: The work is interesting. There are always new challenges to solve and new, complex jobs to set up for our clients.

Q: How have the massive changes in technology made your job easier or harder?

A: Technology has made my job in data easier! The project map is there, the data is there, and all the specs are there now. This is compared to before, when we had to take the actual survey questionnaire and mock that up for tabs, now everything is electronic. I like the fact that I can actually read the programs (for example, in Decipher or Beacon).

Now we use Decipher survey software to program and tab, but back starting in 2003 we used Surveywriter on the web. When Decipher came along—and then current CEO Ken Roshkoff’s ResponseCash PFU on the World Wide Web—I was floored, it was a new age idea of gathering data. Wow!

Like everything else, the market research industry is much more digital now. And in turn, the data has gotten much more complicated and that makes the cleaning a bit more challenging, but that is what I like about it. I’m good at playing Sherlock Holmes – finding the problem (if there is one) in the data or program. It is really rewarding when I find it.

Q: What keeps you interested and engaged in your work?

A: The results for some jobs are quite fascinating! When I first started, I thought the idea of our ResponseCheck service was so smart—to ask people for information and have it on the back of a check to get the answers (now our ResponseCash PFU, where all data is collected online). In my early data entry days, I would enter the data from the back of the checks, as well as booklets from custom jobs. And there was a telephone interview place that would drop off questionnaires that I would enter. After working in data entry for about two years, I was asked if I wanted to learn tabulation. When the person in charge of tabs left, I was then put in charge of tabulations. That’s when I had to start running the show and there is always something new to keep me engaged and enthusiastic.

Q: What were some of your most memorable projects over the years?

A: I would say that my most memorable job was Market Map—where we collected answers over the phone on paper, everything was collected and made into map graphics that were really cool looking… it was a really big job. I also remember doing a project for Wawa. They collected paper questionnaires in their stores where interviewers were physically interviewing customers. I did everything from data entry to tabs for that job. Another study I remember was for R.J. Reynolds Tobacco, there were so many brands of cigarettes that data had to run overnight on our system because the study was so big and contained so much data. We had a Sony job that was similar in size as well. It was about different music groups/artists and songs—and one of the coding people didn’t know how to spell Lynyrd Skynryd and I had to tell them how to spell it. In more recent years, we had a cholesterol medication tracking project that went on forever, a SampleTrak study for a glucose meter given to diabetics had interesting results. This past year, we had a really cool eCommerce experience study where we had stacked data that was really easy to work with. The package testing and concept testing studies all were really cool, but I find all of the jobs to be interesting.

Q: What is your favorite part of the job (what you do)?

A: Doing my job and getting done! I like the sense of accomplishment from finishing a project.

Q: What is your favorite part of working at AMC Global? 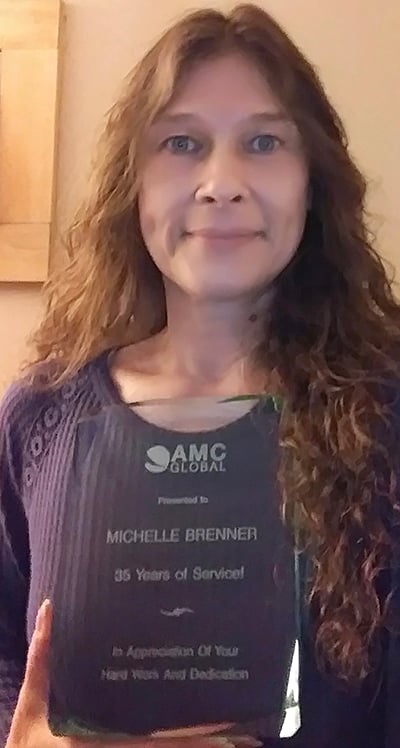